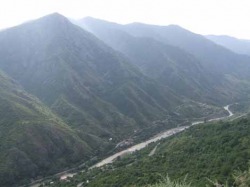 I am currently working with Dr. Charles Egeland at the University of North Carolina - Greensboro on a Middle Paleolithic project in the Lesser Caucasus in the Republic of Armenia.

This area lies within a natural geographic corridor that connects west-central Asia with Africa and Europe. Hominin presence in the region in the early Pleistocene is testified by the site of Dmanisi, which is about 30km to the north of the proposed study area. We have used GIS-based models to help predict potential dispersal routes passing directly through northern Armenia.